Since July 2021, we have seen the price of SBUX sliding from the peak of around US$126 as a result of a number of headwinds as follows:

More union activities within the company

Having a union will potentially increase the cost of business which has a negative impact on the stock valuation of the company. In Long-Run Impacts of Unions on Firms: New Evidence From Financial Markets, 1961-1999 (NBER Working Paper 14709), co-authors David Lee and Alexandre Mas estimate that the average effect of a union win at a workplace is to decrease the market value of the affected business by at least $40,500 (in $1998) per worker eligible to vote, based on monthly stock prices for 24 months before and after a vote to unionize. Their simulations suggest that a policy-induced doubling of unionization in the United States would “lead to a 4.3 percent decrease in the equity value of all firms at risk of unionization.”

With China’s zero-covid policies, its disrupting domestic consumption pattern within the country itself. In recent times, we saw Chinese authorities locking down Shenzhen and even part of Shanghai as a result of the increased number of infection in these regions. Going forward, it has created a number of uncertainties in SBUX China earnings. Starbucks has the largest number of stores in China, outside the United States. The company currently has a target of 6,000 stores in China alone by 2022.

The Chinese market is going to be one of the key drivers for the company going forward. But meantime, it’s going to be clouded by the uncertainties as a result of the ongoing heightened Coronavirus infection. During the last quarter of 2021, same-store sales in China fell 14% and 75% of stores in China were closed or had limited hours at the end of December 2021.

Starbucks hired more workers than anticipated during the quarter, which led to higher training costs. Attracting and retaining workers continues to be a challenge for Starbucks as well as other retailers as mentioned by the company in the last earnings call. In October 2021, the company said it was raising workers’ pay to help ensure a steady workforce and all of its U.S. workers will earn at least $15 — and up to $23 — per hour by this summer. Workers can also get a $200 recruitment bonus to help attract new employees. With the ongoing wage inflation experienced in US, labour cost is expected to negatively impact its operating margin in 2022. Starbucks said it is cutting back on marketing and promotions to help offset its rising costs.

One positive is the fact that Starbucks had raised prices twice in October and December 2021 to account for higher commodity, transportation and labor costs, but it didn’t dampen U.S. customer enthusiasm. More price increases are planned for this year, the company said. It seems that the consumers are less price-sensitive when it comes to the company’s products and services at the moment.

Starbucks is a master of employing value based pricing to maximize profits, and they use research and customer analysis to formulate targeted price increases that capture the greatest amount consumers are willing to pay without driving them off. Starbucks coffee maintains a fairly inelastic demand curve, and a small price increase can have a huge positive impact on their margins without decreasing demand for beverages.

This has been a global problem and as a matter of fact, Starbucks is not immune to it. However, I believe that this supply-chain disruption was heavily contributed by the global lockdowns during the pandemic and once the global economies start opening up, this is expected to ease off.

“Entry of new competitors to the specialty coffee market in China” was one of the business risks Starbucks listed in its annual report filed in November. The company has full ownership of its stores in China, giving it a greater share of the profits — and risks — from the massive market.

Guangzhou and Shenzhen have each seen thousands of coffee shops pop up in the last five years, according to data from Meituan, which runs a food delivery business and operates Dianping, China’s version of Yelp. Shanghai remains the largest coffee market, with nearly 3 shops per 10,000 people versus a ratio of about 2 for Guangzhou, Shenzhen and Beijing, according to Meituan. Starbucks retains the lead in China’s specialist coffee and tea shop market with 36.4% of the market, according to Euromonitor figures for 2020. But the market for tea drinks was twice as large as that of coffee in China and that gap is expected to expand this year, Meituan said citing industry data. The company said the number of milk tea and fruit juice storefronts is about four times that of coffee shops. Hey Tea is second to Starbucks in China’s specialist coffee and tea shop market, with an 8.8% share, according to Euromonitor. The Shenzhen-based company is best known for tea that comes with a cheese-like foamy layer of cream on top. Hey Tea is also climbing into the global market, with a 1.1% share of the category worldwide, according to Euromonitor.

For millennia, drinking tea has been an important part of Chinese culture. However, times are changing. China is slowly becoming a coffee-drinking nation, as consumption is growing at an incredible 15% annually, as opposed to the global rate of 2.2%. Despite the Covid-19 pandemic, cafes in China have had continued success. In 2020 alone, the city of Chengdu saw a new coffee shop open every day, bringing the total number of cafes in the city to over 4,000.

Coffee consumption in China is on the rise, particularly among the younger generations. A report by Deloitte suggests Chinese coffee drinkers are predominantly white-collar workers between 20 and 40 years of age. These consumers are mostly educated, have high levels of disposable income, and live in “top-tier” cities. In China, cities are divided into four different tiers: tier one cities such as Beijing and Shanghai are considered to be the largest, wealthiest, and most populous cities in the country.

Interestingly, the same report finds Chinese consumers are increasingly dependent on coffee for physiological and psychological reasons. In particular, they turn to coffee to re-energise and relieve stress at work. When they do so, they tend to have higher expectations and preferences for better quality coffee. Chinese millennials and Gen Z, meanwhile, are generally more curious and open to new experiences. As a result, they will often seek out new cafés and ways of drinking coffee.

Region-based consumption behaviour and preferences have also developed within the country. For example, consumers in Shanghai enjoy new concepts, flavours and experiences, while those in Guangzhou and Shenzhen tend to care more about pricing and quality.

With the changing consumer pattern in China towards coffee drinking, Starbucks should benefit with its superior branding among the new and upcoming new cafes. This factor will remain as one of the key risk as Starbucks continues its expansion in China.

Starbucks is suspending all business activity in Russia, and its licensee will temporarily shutter locations there. According to BAC, the company has has about 130 outlets in Russia and Ukraine. They are all licensed locations, so Starbucks doesn’t operate them. Based on estimates, these two countries account for less than 1% of Starbucks’ global revenue. As such, we should not be seeing a big impact on the company’s revenue.

Indirectly, the war is contributing negatively to the company’s bottomline as a result of higher transportation cost. However, this war is not expected to be a long drawn war and eventually, the cost-push inflation should ease.

Starbucks said this week Monday that it will suspend its stock repurchasing program, effectively immediately, as Howard Schultz returns to the company as chief executive for the third time. “This decision will allow us to invest more into our people and our stores — the only way to create long-term value for all stakeholders,” Schultz wrote in his first letter to employees since returning as interim chief executive.

In the short term, this might be share price negative but over the longer term, this should be a good news as the company starts re-investing into its business and employees.

Howard Schultz will return as interim CEO, once again taking the helm of the coffee chain he elevated to a global brand while the company searches for a long term successor. This will be his third tenure as Starbucks’ chief executive. Schultz’s salary as interim chief executive will be $1, the company said. Hobson said Starbucks wants to lean on “all of Howard’s expertise and all of his brilliance” throughout the transition, but denied he would stay on longer as the company’s next full-time chief executive.

The fact that such a big company without succession planning on its management comes as a bit of a surprise to me. But with no long term solution as to who will be leading the company into the new future, it may create a share price overhang in the short term.

Current PE of 22.35x TTM is below the average for the past 11 years, which is 25.25x. I believe that the market is pricing in the above negatives that i have shared. But if some of these headwinds are removed (which probably will), based on a PE of 27x forward earnings (Starbucks’ EPS has more than quadruple over the last decade) and based on the average consensus EPS estimates of US$3.34 for 2022, the fair value should be US$90.18. 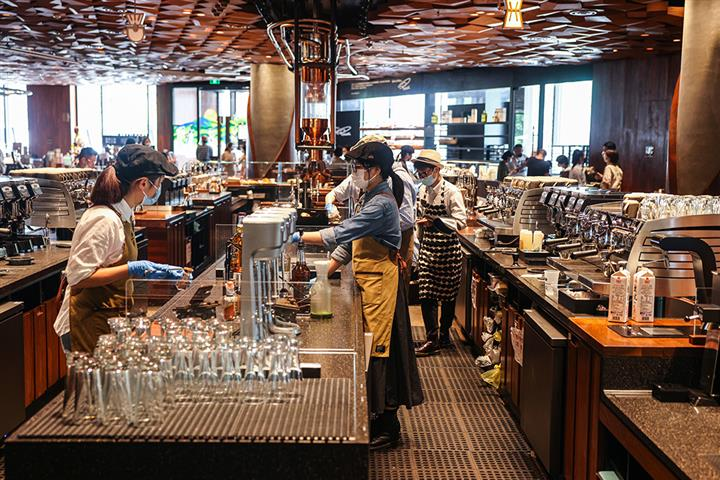 Starbucks (SBUX): My Cup of Coffee! My Opinions/ Views